The Eastland City Cemetery is more than just the final resting place of loved ones who have gone on before and their memory which is evident by the daily visits of family and friends. The cemetery is also a place of historic resources. The cemetery is a reminder of early settlement pattern, religion, lifestyles and genealogy. The cemetery has many war veterans, early settlers, politicians, officers of the law, and even those who went against the law. Names on grave markers serve as a directory to these early residents and even reflect the ethnic diversity and uniqueness of the population.
Click here to view the entire cemetery directory. 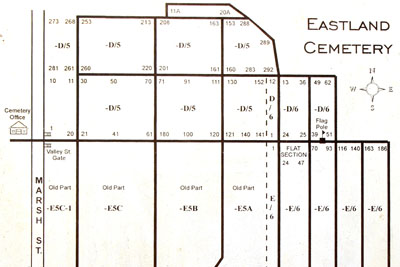 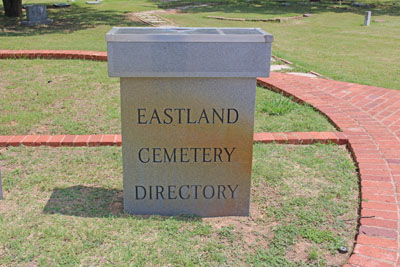 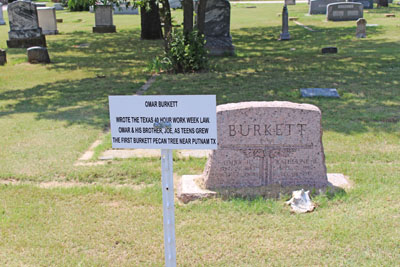 Grave marker designs and cemetery decoration represent a variety of cultural influences that helped shape the history of Texas. 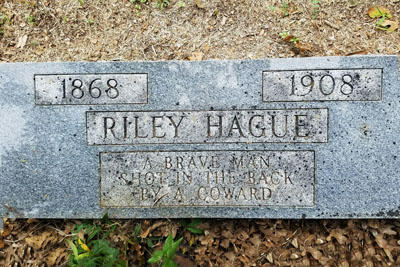 "A Brave Man Shot In The Back By A Coward"

The following are just a few of those who helped settle Texas and Eastland and are residents of the Eastland City Cemetery.

CHARLES ULRICH CONNELLEE, born 1851, died 1930. Founder of Eastland. Mr. Connellee, along with partners J.B. Ammerman and J.S. Daugherty, laid out the court house and city streets and had the county seat moved from Merriman to Eastland, as the city was named for the county. 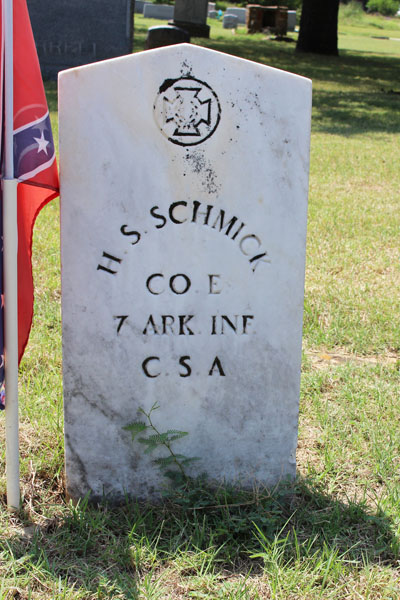 H.S. "HENRY" SCHMICK, NO DATES. First Sheriff of Eastland County and served with Co E. Arkansas Inf. of the C.S.A. He and his two brothers helped to map out the streets of the city of Eastland in its beginnings.

JOSIAH G. "DOC" SCURLOCK, born January 11, 1850, died July 25, 1929. Rode with BILLY THE KID during the Lincoln County Wars in New Mexico. Josiah was born in Alabama and studied medicine, earning him the nickname "Doc". He later moved to New Mexico and hired on as a cow hand with an English nobleman cattle rancher named John Tunstall. Another of the more famous cow hands was Mr. William H. Bonney, better known as "Billy the Kid". Mr. Tunstall was murdered and thus started the Lincoln County War of New Mexico. After the end of the Lincoln County War, all involved were given a pardon by the governor, except for "the Kid". "Doc" gave away his guns, except for a squirrel gun, sold a gold mine for $500.00 (later sold for $75,000.00) and moved his family to Tuscola in the Texas panhandle. Later, he and family moved to Eastland, Texas where "Doc" lived until his death in 1929. "Doc" didn't speak much of his "outlaw" days due to the many who still wanted him dead. He worked for the highway department in Eastland and wrote book reports and book reviews for students at the University of Texas.

W.P. "WILLIAM PIKE" TINDALL, born March 4, 1818, died November 25, 1901. He came to Texas in January of 1836 at 17 years of age and turned 18 shortly after arriving from New Orleans. He joined with Sam Houston and fought at the battle of San Jacinto. He was part of the MIER MEXICO expedition and the BLACK BEAN drawing that saw Captain William Eastland, who the city and county of Eastland is named for, die. Tindall spent two years in a Mexican prison after the Black Bean drawing. He moved back to Alabama and served for 6 months in the Civil War with the C.S.A. He held county offices in Alabama before returning to Texas and settling in Eastland, Texas.

GEORGE M. REYNOLDS, born May 28, 1846, died March 2, 1937, was a member of the UNION FORCES during the CIVIL WAR, with Co G, 3rd Ark Cav. He was probably part of the "MOUNTAIN TROOPS" from Arkansas that did not want to be part of the Confederacy and hid in the Arkansas mountains and later joined the Union Forces. 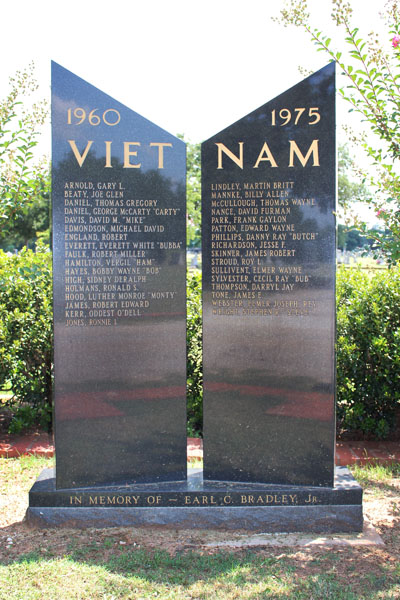 "AUNT" JANE BOWLES, born March 22, 1862 died December 18, 1961. She came to Eastland as a small child and was the first Black to live in Eastland. At the time of her death, 99 years of age, she was still active. She is buried in the BOWLES-CARTER plot in the Old Section of the Eastland Cemetery.

ELMO HILL, born October 13, 1893 died May 13, 1943. Train conductor of the EASTLAND, WICHITA FALLS & GULF RAILROAD, also known as the Ringling Railroad. John Ringling, of the Ringling Circus family, was involved in building this railroad in Eastland to transport water from Breckenridge to Eastland in 1919. Elmo Hill was the only conductor and the railroad shut down shortly after he died in 1943.

MARENE JOHNSON-JOHNSON, born February 5, 1899 died November 6, 1978. The creator of the Stamp Mural in the Eastland Post Office and she is one of two buried NORTH-SOUTH in the Cemetery. The stamp mural took seven years of hard work in her "spare time" and $15,000.00 of her own money.

ED T. COX, JR., born July 31, 1906 died December 10, 1947. One of the greatest athletes to be at Eastland High School. A 200 pound fullback who was as fast as a sprinter. He could run, pass and kick. Probably his best game was in 1925 against the powerful Ranger Bulldogs. The Eastland Mavericks were to be no challenger to the Bulldogs, but COX scored 3 touchdowns, threw for one TD and rushed for 249 yards in an Eastland Maverick win of 25 to 0 over the Ranger Bulldogs.

JUDGE TRUMAN CONNER, born 1849 died 1933. Served as District Judge at Eastland, Texas from 1887 to 1898 and later served as Chief Justice, Court of Civil Appeals at Fort Worth.

JIMMY DOOL
"BEHOLD MY FRIEND ?AS YOU PASS BY ?YOU ARE NOW, ?SO ONCE WAS I; ?AS I AM NOW, SO YOU WILL BE, ?PREPARE FOR DEATH AND FOLLOW ME"

RILEY HAGUE
"Brave man shot in the back by a Coward"